The Dark Web has been responsible for the creation of many things since its inception, among those a few different types of cryptocurrencies. One was called Xcoin, developed by Evan Duffield as a fork off from Bitcoin upon forming an alternative vision for its direction. At first it was primarily used as a Dark Web currency to facilitate transactions between anonymous individuals, but it gained mainstream traction due to being powered by excellent technology.

Its second name of Darkcoin proved to be overly-brooding and sketchy-sounding to the average person so it was rebranded a final time as Dash in March of 2015, helping its public image. Then by August 2016, it was no longer being used on shadowy virtual markets, finally achieving accepted status alongside BTC, Bitcoin Cash, and Ethereum.

Due to tragic events in 2018 when the entire market lost a huge chunk of worth, some people are hesitant to use this coin for daily purchases, however, it’s absolutely safe as long as funds aren’t kept in electronic form for long periods of time. This means as soon as a payment is received it should be converted back into USD to avoid large fluctuations. Nevertheless, brave users simply hold onto it in order to enjoy a possible increase in value, which is obviously not for the faint of heart.

How to Deposit at Online Casinos with Dash

The process is identical to competitors so most already know how to deposit at U.S. online casinos with it, the majority just not realizing the similarities. It all begins with opening a Blockchain wallet allowing conversion of United States Dollars into Dash, then facilitating transactions to other accounts.

After opening a profile at Kraken or equivalent, it’s necessary to give personal information to verify identity, usually providing an image of a driver’s license or government-issued photo ID. Once approved, it’s then funded with USD via credit card, bank wire, or another approved option. 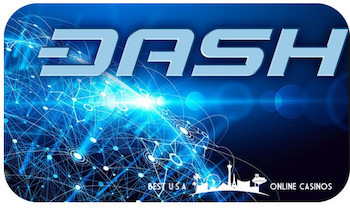 Next, convert the money and post a trade request with price willing to purchase, although occasionally it can be bought for less than stated if someone has entered an unclaimed order requesting lower. Software then automatically matches two parties looking to sell and buy at the same amount and everything is completed in seconds. It’s 100% private and personal as details aren’t shared, even untraceable by developers behind the scenes.

After arriving in the wallet, email the operator’s customer service team and ask for an “address” to send it to, which nowadays is generated automatically on cashier pages. Regardless of method, they issue a long, unique string of numbers and letters that will never be used again, just like Ethereum betting websites or equivalent.

Carefully copy and paste this address into the wallet order and click Send, funds then posted in USD and ready to stake within minutes. Usually they supply a concrete exchange rate valid for the time it takes to complete the transaction, so exact sums to expect are known beforehand.

When withdrawing winnings they’re easily converted to cash thanks to SpectroCoin offering Bitcoin prepaid cards, usable at any ATM, allowing USD, Euro, or Pounds. This isn’t uncommon in the industry but it’s definitely still a perk to use.

Pros and Cons of Dash

Similar to all cryptocurrencies, the main attraction of Dash is that activities are fully anonymous, incurring very low processing fees, often only a few cents each. It boasts global network coverage with fixed fees regardless of destination and transfers are always executed at the same speed.

Another significant positive is it’s extremely secure, even more so than others, as a result of advanced encryption methods, specifically InstantX technology. It harnesses the power of its masternode network and sends irreversible transactions within four seconds when Use InstantX is selected in a Blockchain wallet.

The sole doubt is “more of a question” reflecting the uncertainty of network benefits as it’s still being hotly debated among experts. Specifically, outside developers are wondering if the two-tiered system is truly decentralized due to its mining process, citing 2,000,000 units were mined during its 1st day. However, this is just a small technical concern that shouldn’t affect normal usage.

Like other cryptos, Dash claims to have solved some of Bitcoin’s classic problems such as speed, financial privacy, and decentralized governance. The crux of their argument centers around the aforementioned masternode technology which acts as a “government” for the commodity and helps determine its future structure, as well as communication tools between Blockchain wallets and orders. This system includes all usual elements such as nodes and miners, with anyone possessing a minimum of 1,000, a static IP address, basic RAM, disk space, and bandwidth able to run one.

Once functional, two separate types of transactions are performed with InstantSend bypassing traditional mining and simply requiring validation from other masternodes, ultimately resulting in faster speed. In addition, they facilitate PrivateSend to make the entire undertaking incognito, mixing a collection of unspent balances in each transfer.

These different factors combine to prove the main differentiator between Evan Duffield’s creation and BTC is “in the nodes”.

For years, one sole brand dominated as the best Dash casino welcoming USA players, listing every popular coin and featuring fantastic products. However, these days BetOnline has a bit of competition so they continue to regularly update payment methods to ensure clients enjoy a wide selection of options.

Their sister sites of Wild and SportsBetting.ag provide different venues for crypto gambling, all under a trusted ownership group, taking sports wagers and boasting 24/7 electronic table games. Newcomers constantly arrive but no one has yet to dethrone them.