Figuring out how to monetize new technology is not just a modern problem for the Twitters and Googles of the world, like when Robert Morse invented the telegraph and then had no idea what to do with it next. For its part, the United States government had no interest in investing in electrical impulses sent down a wire but thankfully, an astute plow salesman did.

Ezra Cornell was a millwright in Ithaca, New York who sold farm instruments and in 1842 while on a trip to Maine he met a customer who had worked with Morse and was looking for a method for burying the cables. He studied the problem and crafted a contraption that scraped a 30-inch deep ditch, dropped an insulating pipe with wire, and then filled in the ditch with dirt as it was pulled behind a horse. That’s pretty decent technology for the mid 1800s.

Even at this early stage Cornell was already looking into the future and saw telegraph technology hanging from poles. He solved the problem of exposed lines with glass insulators and proved how it worked by building infrastructure between Baltimore and Washington, D.C. When investors did not rush to his office in support, he raised his own capital and went on to connect the major cities of the American Midwest.

One of the collaborators on his Baltimore-to-Washington project was Hiram Sibley, who ran with the idea by forming the New York and Mississippi Valley Printing Telegraph Company. Cornell and Sibley eventually got together to create the Western Union Telegraph Business, which quickly became the standard way to send a message over the wire.

In 1871, they transmitted a money transfer for the first time after they had established more than one million miles of lines. The telephone was only a few years away, waiting to capture what would become their dominant area of business – moving funds via the technology and removing the need to transport actual cash between two parties.

It’s quite amazing to realize that online casino players depositing with Western Union or other private wire transfer services are basically doing the same thing a Mississippi riverboat gambler would have done in New Orleans 150 years ago to settle a debt to an associate in St. Louis. Simply pay at the office in Louisiana and then the balance can be picked up in Missouri when it arrives.

It’s sometimes confusing looking at the list of options on a betting site’s cashier page because technically they could be referring to just about anything with “Bank Transfer“, “Bank Wire“, “Money Transfer“, or any combination of the above. The monikers relate to either Western Union or MoneyGram, or the traditional manner between accounts that people have been using for years. Of course, when sending to a sportsbook it’s always going to an offshore bank and not domestic. So to keep things straight, they usually refer to “Money Orders” as WU or MG and the traditional tool is listed as “Wire Transfer“.

Balances sent through this method arrive with a long paper trail since the individual has instructed their financial institution to take it from an existing personal account to a destination of the operator’s choosing. Once received by them, the total amount is immediately available for play and there’s no need for any further personal details so it’s a fairly private process for both parties.

However, safety and convenience come with a price and the fees are much higher than credit card transactions and are incurred by both the sender and the receiver. Even so, the site accepting it wants to keep their clientele happy and used to cover the costs, but now it’s starting to eat into too much revenue – it’s become very expensive. Most people would probably agree that it would be distasteful to pass all of the fees on to them, so it really is a lose/lose situation for everyone.

This is why many Americans have decided to gamble with Bitcoin at USA betting sites or one of the other great cryptocurrencies – it’s cheaper, quicker, and 100% untraceable.

Due to all of the security measures, bank wires are the preferred option for those players who are moving large sums in a single transaction. The high fees are a bit more palatable when added on and most places are happy to cover them for deposits over a certain amount, with $1,000 commonly being the threshold. Therefore, this is the choice most often used by professional sports bettors or high rollers who want to send huge bankrolls to their account since they can easily move $25,000 or more in one shot. 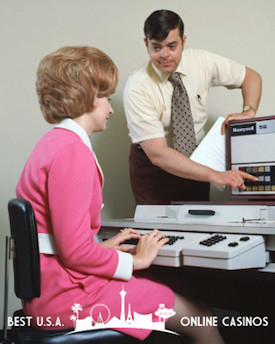 Like an automated teller machine, operators normally restrict the total that can be withdrawn at once to limit liability, but some will waive the requirement to those who always request payouts via wire. This obviously means that if someone goes on a roll and accumulates a huge balance it’s possible to get it all and sidestep the usual maximums…if they’ve been a customer there for a while with a good history, of course.

Since these types of transfers are confirmed at both ends, wiring money to a personal account is an excellent way for websites to protect themselves against fraud or issuing the winnings to the wrong person. This is why it’s still listed as one of the preferred withdrawal possibilities at many places.

Keep in mind that the task won’t be finalized for a while as the confirmations takes time and the usual wait can be anywhere between 5 to 10 business days for everything to be completed. Sometimes the funds will arrive sooner but the larger window ensures they will always be able to process payouts within their stated timelines. In this day and age it just takes a lot of time to send cash in this manner – especially when it’s coming from an offshore back into the United States. There are tons of security checks and red tape slowing things down.

So if you’re looking to move to something faster, easier, and more discreet, keep an eye on our guide of the best online casino deposit methods for USA players to stay in the loop and know exactly what’s available. New options are constantly being released and many people are shocked at how amazing some of them are – there are tons of choices to satisfy every need.