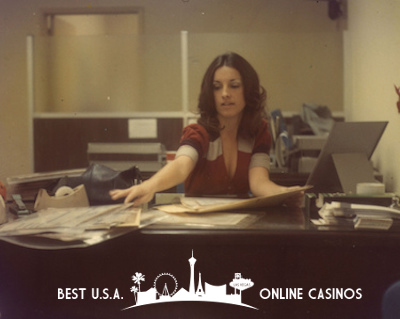 Since iGaming’s inception in the late 1990s, operators have accepted money orders as a banking method because choices were quite limited. Easily executing financial transactions hadn’t caught up to the simplicity of virtually laying action. Therefore, everyone had to take what they could get and if it wasn’t possible to deposit at VISA Casinos, it was often necessary to get into the car and drive to a Western Union outlet or similar and fill out paperwork.

Americans were already used to moving funds around this way between family and friends, so asking them wasn’t a big deal. For many players this option was actually their first choice since it functions exactly the same way as a paper check from a personal bank account, except sums are prepaid, thus providing excellent protection against fraud for both individuals and companies.

These days, fewer places are taking Western Union due to lower demand and the fact there are much better ways to take care of business now. However, a handful of honest destinations remain and the best are listed below. All allow money orders to top up balances and come with a stellar reputation.

Anyone on a quest to hear more can simply click on their logo in the “Read Review” column and learn important details, including current bonuses, game selection, and product quality. Alternatively, if wanting to go directly there for a look, tap on brand names on the right to securely visit.

Once it’s been confirmed money order deposits are accepted, they are attainable at a number of locations, in any amount, stamped on two portions of the watermarked document. One portion is retained by purchasers as evidence of payments and the other is passed onto second parties.

Starting off, sites give names and addresses to send to and then bankrolls should be in accounts after a few hours, but in some cases it can take days to go through if encountering an issue. To be clear, the first time is very strange since giving cash to an unknown individual living in a foreign country isn’t normal. It only feels weird initially and after that it’s smooth sailing going forward.

The most common region used is the Philippines and often it’s a locale called Quezon City, situated just outside of Manila. This is because the population speaks English so many are hired to accept transfers all day, every day, on behalf of casinos and sportsbooks working with them.

Due to the physical running around by everyone involved, WU is one of the slowest ways available today, second only to Check by Mail, which is only as fast as the post office wants to deliver it. It’s surprisingly common to hear of long wait times for checks to be received, sometimes taking 28 business days or more to finally arrive, ensuing last minute action before kickoff is impossible.

Whenever a directory of deposit methods at WU Casinos has Money Order listed they are talking specifically about them or a competitor. They can’t actually say “Western Union” because it’s a trademarked brand requiring permission to proclaim. Also, since the Unlawful Internet Gambling Enforcement Act of 2006 (UIGEA) makes it illegal for companies to facilitate financial transactions between players and operators, there’s zero chance they would ever permit their name to be used for American clients. Clearly, it’s imperative to stick to something generic.

The main strength of using the service is neither a credit card nor bank details are needed to complete the undertaking if paying in cash at an outlet. Therefore, no personal information is given and no private data divulged beyond a physical mailing address, which is very good news to those valuing privacy. Not to mention, bankrolls are limited to amounts sent so it isn’t possible to quickly top up accounts with supplementary funds during a losing streak, although some might actually see this as a “weakness”.

In addition, spur of the moment fluttering sessions after a few drinks or when sitting at home bored are denied due to time restraints. It’s the most deliberate technique available, usually preferred by sports clientele at season’s start and in advance of big approaching games. A lot of time must be allotted to buy it, fill out the forms, and send it off, which in a digital age feels like “forever” to under 40 year olds. Thankfully, Western Union now has an electronic option no longer requiring visiting a physical outlet, as well as an app for smartphones.

Occasionally, money orders can be used to withdraw winnings but be certain they will go to a service close by; contact the customer care team to ask before initiating. This is a process that could consume up to 10 business days (or more), so don’t be in a rush to receive the payout.

Anyone knowing beforehand they’ll need to get winnings in a hurry should learn how to buy and transfer cryptocurrency to betting sites to eliminate long waits to get paid. Fees are low and they only take minutes to complete.

Those seeking to use Western Union to gamble need to sign up for a new profile with them, choose a way to move funds into the WU wallet, and then select how it will be collected on the other end. The three choices are in-person pickup, bank account, and mobile phone if the receiver has already signed up for it. Usually online sportsbooks direct the aforementioned random individuals to pick it up on their behalf, so don’t be surprised when this happens.

Afterwards, confirm details, ship it off, and check later to verify it arrived successfully, which can take anywhere from 4 to 36 hours depending on the situation. Now is probably a good time to mention it’s also required to send WU a copy of government-issued ID if attempting to move around any moderately-sized sums, so be prepared to scan and email documents for their records.

In short, be ready to surrender all personal information and be legally linked to activities. Interested in learning about crypto yet?

Money orders are the creation of three British postal workers in 1792 giving English sailors a way to send funds to wives and sweethearts in the far-flung reaches of the United Kingdom. As a result, Stow & Co. became a private enterprise promoting this convenience to Blue Jackets and Redcoats for a 3% commission on totals.

For more than four decades the company enjoyed raging success and in 1838 the business was taken over as an official duty of the Royal Mail. The fee structure was switched to a flat 12 pence (cents) for transfers of £10 or less and 36 pence for larger, up to a maximum of £25, the largest note in circulation in England at the time.

During the American Civil War of the 1860s, the United States Congress contemplated adopting this system as a safer alternative to mailing bundles of cash. Today, post offices are the main purveyor, in addition to banks, Western Union, and select retail stores.

The maximum that can be sent is usually $1,000 domestically and $700 internationally, but limits are being constantly increased to stay in line with inflation and cost of goods. Fees are continuously changing and depend on amount, destination, and other factors that are impossible to predict like how many competitors are in the area. Basically, they’ll always charge as much as they can get away with.