The most popular credit card in America for over 40 years has been VISA, which is why every e-commerce platform readily welcomes it. It would be utterly foolish not to, since 30% of the country has one, easily acquired through major banks such as Capital One, TD, Morgan Stanley, State Farm and countless others.

Presently, the below listings of reputable VISA betting sites reflects policies, industry standing, incentives, and quantity of products available. Each is independently reviewed and frequently tested to ensure quality and integrity, with rankings constantly updated throughout the year.

Locating United States VISA casinos was easy for decades, widely accepted by all and consistently the first choice of most members. It was quick, straightforward, and rarely encountered issues. After all, this is the planet’s biggest credit enterprise, shouldering one-third of revolving debt, regulated in 200+ countries. Alas, these days, procedures are considerably more complicated.

For example, often the region where accounts were created and IP addresses are prime factors in determining whether or not purchases are approved. Obviously, ones initiated from the U.S. are scrutinized closer than ones in Europe or similar jurisdictions. Therefore, deposits are rejected periodically and upon subsequent attempts, cards are permanently flagged, forcing people to find alternative methods.

That said, it’s important to remember that when the federal government moved to shut down the activity back in 2006, the Unlawful Internet Gambling Enforcement Act (UIGEA) targeted banks processing financial transactions, not customers instigating them. Accordingly, declines were entirely possible, SCOTUS’s eventual legislation reversal in 2018 unfortunately not improving chances of success.

Recently, offshore VISA sportsbooks have pushed players towards cryptocurrency, even though it’s still tremendously popular and accepted at all top operations. Depending on specific events and types of stakes desired, getting down with plastic is never a problem.

Countless places used to pay winnings directly back onto credit cards, although everyone stopped this practice years ago, fearful of alerting authorities to what was actually transpiring. It’s clear gaming websites are more concerned by money arriving than leaving, so they’re not about to risk being flagged for withdrawals.

Consequently, gains must be recouped via crypto or check by mail.

How to Deposit and Gamble with VISA

The convenience of depositing and gambling with VISA at USA online casinos includes a hefty price tag due to overinflated tariffs. Thankfully, costs in excess of certain amounts are occasionally reimbursed, so always check FAQ pages to confirm thresholds. Nevertheless, it is now commonplace to pass along merchant fees of a few percentage points to customers, brands like Bovada billing 4%+ of total sums.

Individuals are sometimes nervous when using personal cards because sensitive details such as account number and address are shared, yet it’s no riskier than other purchases and data is completely safe. Virtual cashiers use phenomenal encryption technology to safeguard client information, everything just as secure and private as traditional internet banking.

Americans have been helped tremendously over the years by VISA Gift Cards, which usually enjoy an extremely high success rate. Regrettably, these prepaid circumventions can’t be reloaded with additional funds and are only good until original balances are depleted, the reason why full amounts are invariably required.

However, cryptocurrency is thriving and it appears as if both credit and gift options may soon become history since it’s much easier to bet with Bitcoin than physical pieces of plastic imposing unreasonable commissions. It cuts out banks and paper trails, is received instantly, and acts identical to real money, making it an unstoppable economic insurgency.

Nobody would think an established entity like this had a fascinating history behind it, but it’s surprisingly quite dramatic. It started back in 1904 thanks to a second-generation Italian-American named Amadeo Pietro Giannini in San Francisco.

After the city was devastated by an earthquake and fire in 1906, Giannini kept his Bank of Italy afloat by setting up a desk in the rubble made from a couple of barrels and wood planks. Bank of America then emerged from the ashes through a series of mergers he engineered in the 1920s.

In 1958, BofA then ushered in the “cashless revolution” of BankAmericard, quite literally a piece of paper stating name, account number, and address. That groundbreaking slip was the first “revolving credit card” allowing holders to carry balances from month to month and remunerate charges over time, plus accumulated interest, of course. 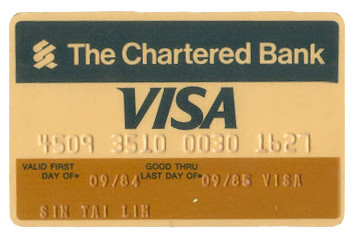 Those first incarnations were given a $300 limit and to stimulate demand Bank of America distributed thousands of unsolicited “$300 loans” to the public. Folks signed up for the ultramodern settlement method in droves, unaware how enormous debt burdens could become if unaddressed. The masses were hooked.

This particular business separated in the 1970s and control was assumed by regionally owned institutions across the world. Re-branded as VISA and paired with an electronic authorization system executing financial transfers in seconds and boasting rock-solid security, a “payment tool for tomorrow” was born.

The contemporary intricate network of global connections was christened VisaNet and this cutting-edge technology quickly grew them into the industry’s largest. In fact, this advancement paved the way for the future of shopping, consumers able to procure products with simple clicks of buttons.

Ultimately, this novel invention would also be the lifeblood of iGaming pioneers providing Las Vegas entertainment to people’s homes.