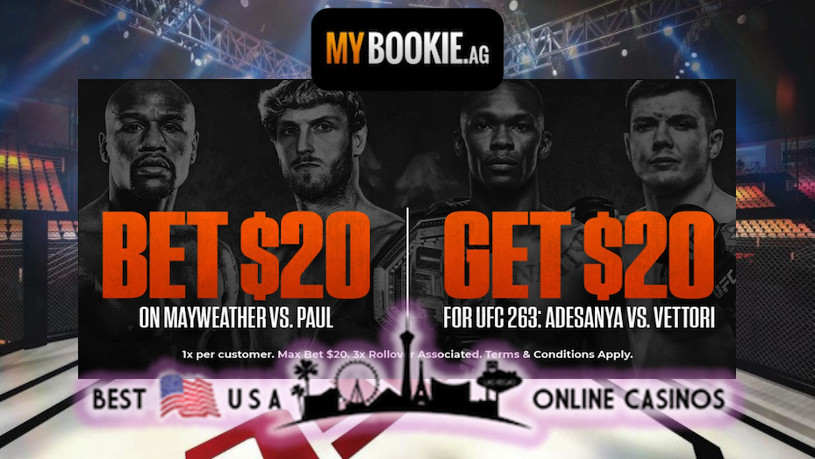 Boxing fans around the nation are ecstatic to finally watch Floyd Mayweather Jr. vs. Logan Paul this weekend after the exhibition bout was postponed from February 20th, 2021. Unsurprisingly, many are cheering for Mayweather as his opponent is certainly not a “professional boxer”, only stepping into the ring twice before to take on British Youtuber KSI, going an unimpressive 0-0-2. Also, Paul has made numerous enemies during his social media career, most notably when disrespecting a Japanese forrest, encouraging The Tide Pod Challenge, and various indecent acts involving animals.

Anyone looking for where to bet on Mayweather vs. Paul should consider fully legal and licensed MyBookie.ag since they’re giving away $20 for UFC 263 to those putting $20 or more on the fight. Zero strings are attached and the sole requirement is staking the highly-anticipated showdown with actual cash, not supplementary balances received from other promotions.

Then on June 11th, the $20 MMA Free Play for Israel Adesanya and Marvin Vettori will be issued to accounts and available for use on the next night’s event. Standard rules of course apply, such as one credit per customer, straight wagers only, and a 3x rollover obligation before withdrawing winnings. That last term simply means risking it three times in order to “clear” the total, placing $60 in subsequent action.

Currently, new members enjoy a casino welcome bonus for U.S. players consisting of a 50% match up to $1,000, one of the largest amounts found thus far during summer 2021. Clients can quickly deposit using cryptocurrencies like Bitcoin or Litecoin, credit cards of VISA or MasterCard, or traditional transfer services such as Western Union or equivalent.

If unsure of who to back on Sunday, watch this expert breakdown of Mayweather and Logan from CBS Sports HQ detailing the complete history, tale of the tape, and strengths and weaknesses of each participant going into the fight.

Here are MyBookie’s official odds for tomorrow including special props, however, ensure to note their policy on determining victory as judges aren’t involved, the decision perhaps coming down to a public vote:

MAYWEATHER V PAUL – PROPS. THERE WILL BE NO JUDGES.

If the broadcast declares a winner via voting, this result will be used for settlement purposes.

If no vote is held, and there was no KO, all wagers related to fight outcome are void.