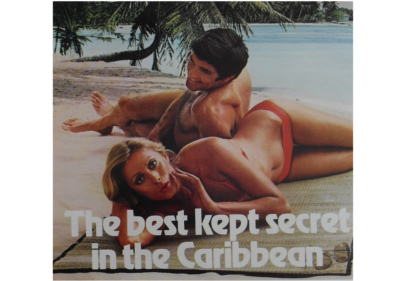 The name may sound as if its origin is full of foreign intrigue, but the reality of Caribbean Stud Poker is that the back story of the popular table game is more “mundane” than “mysterious”. It actually began on cruise ships in the 1980s as a way to play poker against a dealer instead of the others seated at the table, and then sometime in 1987 a Las Vegas insider named James Suttle acquired the rights to the game.

And just how did he get them? Well, legend has it he supposedly bought the patent for a song from a gambler on a bad run in Binion’s Horseshoe one fateful evening. Suttle later resold the rights for a profit to wealthy businessman, Danny Jones, who ran the King International in Aruba.

Jones then spent several years trying to sell the game, which was simply called “Casino Poker“, but it offered too big of an advantage for the House. People on cruise ships never cared about throwing cash away onboard sailing the high seas and simply chalking it up to a “good time”, however, brick and mortar establishments relying on regular customers did not want to gain a reputation for dealing anything with odds that bad.

It took a computer specialist named Michael Titus to solve the problem, who calculated how a progressive jackpot similar to linked slot machines on a network could compensate for the heavily-tilted House-friendly numbers. Titus and Jones cobbled together a progressive jackpot to work on the tables and rebooted the new creation as “Caribbean Stud Poker”, which became the standard version found at the United States online casinos we are all familiar with today.

Like regular poker, Caribbean Stud Poker starts with a mandatory ante up to the table limit. Anyone wanting to contribute to the progressive jackpot makes a secondary wager separate from the money riding against the House, then if they are dealt at least a flush, a portion of the jackpot is won. The better the hand the more it will pay out, and the entire prize amount goes to the lucky person holding a Royal Flush, which is the best possible outcome.

Starting off, once all bets are placed the dealer distributes five cards to everyone seated face-down as well as four face-down to the House, and the final is delivered to themselves face-up. In Caribbean Stud there are no bluffs, nor additional cards to draw or be revealed. 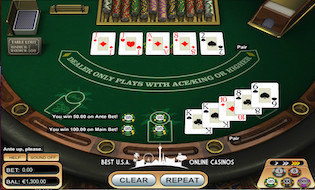 All payouts are based on a paytable that begins at one pair, so if the player has less than that, the hand is mucked and both the ante and the progressive bet (if made) are lost. If they hold at least a pair and thanwant to take on the House using their exposed card, a stake equal to the ante is required.

After everyone has acted the dealer shows their results and must boast a minimum a King High or the round is declared “No Play”. Anyone who stayed in beyond the ante wins that bet back plus a matching total and then the secondary wagers are returned since they didn’t hold a playable hand or “did not open”.

If the dealer does in fact open, all bets have action. Like blackjack, players are competing only against them and not the others seated at the table. If the customer beats the House, the return is determined by the posted paytable. The amounts vary from place to place but generally it will be even money for a pair and can be up to 100x the original stake for a Royal Flush. If the dealer has the high hand, both the ante and the bet are lost.

None of this impacts possible progressive payouts, however. Someone could have a Full House and lose to a dealer Straight Flush and nevertheless win their designated share of the jackpot. The usual cost to play the progressive jackpot each time is $1, occasionally up to $2 depending on the location.

Some establishments will offer the exact same version as described above, instead calling it “Caribbean Hold’em”. There are also Caribbean Draw Poker variants where hands can be improved by drawing one or two cards, although usually this will bump the minimum for the dealer to open from King High to Eights or Better, or a similar small pair.

There are also European variants which dispense with the jackpot and simply have Casino Five Stud Poker just like the cruise ships, which some might find more enjoyable.

Like blackjack, there are optimal strategy charts for Caribbean Stud Poker that will lower the house edge to around 5%. When deciding to take on the dealer based on a single card showing, aggressiveness should hinge on whether an individual’s hand holds a “blocker” to the House’s possible pair, especially if his exposed one outranks the player’s highest pair.

Without bluffing and raising, the main excitement of Caribbean Stud Poker is the potential for wining the progressive jackpot, which can sometimes be close to 6 figures. Otherwise, this is just a game of War using five cards instead of half a deck. It’s advised to always put $1 towards the jackpot, for a chance to win the life-changing cash prize.