Before humans knew how to write and record history they were tossing dice; they aren’t nicknamed bones for no reason, after all. The nearest relative to modern craps is an English game called Hazard that was supposedly conjured up by Sir William of Tyre to keep his knights occupied while laying siege to Castle Hazarth. At the same time a few miles down the road, Arabs were enjoying al Zar, loosely translated in English as “dice”. In short, people have been tossing hard objects with numbers painted on them for ages.

However, the version known and loved today is 100% American, created on paddle wheelers steaming along the continent’s rivers in the 19th century. John H. Winn, who “coincidentally” made his money manufacturing dice in the early 1900s, is responsible for creating one of the most exciting casino games found anywhere today.

It was Winn who came up with Pass and Don’t Pass options, allowing onlookers to bet on roll of the dice and not just success of the shooter. This development helped to create the wild groups now found crowding around tables in Las Vegas, shouting loudly as events unfold.

Thanks to Winn’s idea, up to twenty people may participate in this great social attraction, but unless the rules are understood it can be like walking into the wrong school reunion where insider conversation seems to be in code. Whenever a craps table opens it is usually buzzing non-stop until the croupier switches the button to “off“.

Each person has an opportunity to be shooter (the one rolling dice onto the felt), although it is possible to decline and pass this along if not in the mood to throw. In addition, substitutes can be called in to toss when a player wants to take a quick break.

For an in-depth explanation, check out this Craps tutorial from BetVictor explaining rules, procedures, and how to properly play.

The standardized table and betting field are the main differences between street craps and casino craps, with a Come-Out Roll required before rounds can Open. Come-Outs establish a point number to be used for all subsequent action.

However, prior to this there’s an opportunity to stake Pass or Don’t Pass options. If the shooter rolls a 7 or an 11 Pass bets pay off automatically and if the result is a 2, 3 or 12 it’s craps and those backing Don’t Pass collect, although some places consider a 2 or 12 a push. If any of these numbers appear, the round ends, dice pass, and the shooter begins a subsequent round. 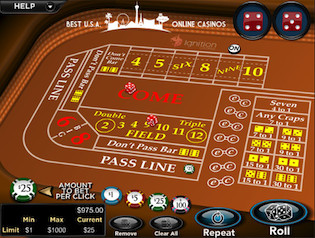 For those interested in casino strategy, Passes are the fundamental stake in the game. When the opening roll is a 7 or 11 it pays even money, carrying a slim 1.41% House edge, with eight ways to win and only four with Don’t Pass. Backing Pass is both most profitable and also most popular. All that cheering is almost always for Pass and unless someone has a strong inclination to be disliked, wagering against shooters on Don’t Pass can receive quite an angry response.

Numbers other than 2, 3, 7, 11 or 12 establish the point with shooters continuing until 4, 5, 6, 8, 9 or 10 is rolled again, or a 7 appears for the first time. Once the point is established it’s possible to roll it to Pass instead of a 7. Since Passes have an odds advantage on initial throws, it reverses afterwards.

Alternatively, those laying down on Don’t Pass have the disadvantage on opening tosses and now win if a 7 is thrown before the point number. Original Pass bets must remain in play until resolved, and Don’t Pass funds may be removed when unresolved following the Come-Out Roll. This would be a bad decision, however, considering the odds have shifted firmly in their favor.

Each roll after the Come Out is open to new, independent wagers at true odds called Come and Don’t Come. Since these carry no House edge they are usually capped, often at 2x the amount of Pass or No Pass options, although some establishments promote versions with payouts as high as 100x to attract customers.

With chips and dice and strange terms flying around, a craps table is a bewildering place. At its core, however, the Pass is one of the simplest and fairest stakes to be found and beginners can safely join in on the fun.

Once players become well-versed in how things work, Come and Don’t Come options at maximum odds are sound decisions. Beyond that, propositions on single rolls are simply donations to the House over the long run.

There are lots of different variations across the world, with New York Craps dispensing with Come and Don’t Comes, High Points Craps paying out for 11 or 12 and 2 and 3 become re-rolls. Crapless Craps, besides being an oxymoron, is a common online version where all numbers are either a 7 or a point.

Finally, for those disliking the racket of dice clacking together, Die Rich is an impoverished form using just one die. However, this version is definitely lacking in excitement and won’t be listed by many websites.