Origins of roulette are rooted in mathematics and literature, its name literally meaning “small wheel”, which first belonged to a 1600s French physicist and mathematician named Blaise Pascal. He was actually chasing an age-old dream of a perpetual motion machine but instead, his design became the model for the first recognizable wheel, appearing in 1796 at Palais Royale Casino in Paris.

Nowadays, everyone around the world opts for virtual sessions rather than patronizing brick and mortar establishments. Consequently, here are the current listings of best roulette USA online casinos, complete with latest welcome bonus offers and links to independent reviews of each.

All operators above are guaranteed to act with honesty and integrity, as well as pay winnings promptly once requested. Rankings are updated frequently as new information comes to light and situations change, especially if new roulette variations are added.

Every site features completely mobile-compatible versions of all games, accessible anywhere with WiFi, playable on any iOS, Android, or similar device. Simply tap VISIT NOW to be securely taken to the respective websites to check them out and decide where to register, accounts totally free to open regardless of destination.

An 1800s Frenchman would recognize almost everything if seated at a contemporary roulette table as it’s barely changed at all. Betting fields are laid out in 3×12 grids and numbers 1 through 36 snake sequentially through, starting in the upper left corner and finishing at bottom right.

A section for zero and double zero, if used, are inserted at the top, with spaces for action on specific groupings of numbers are located along the side opposite the croupier. A new round begins with players placing chips on any sections desired, selecting anywhere between one option and entire board without limit.

Once the dealer announces No more bets, action must stop and no additional chips may be placed. This is declared after the wheel has been spun and the ball launched in the opposite direction begins to lose momentum.

Once the ball lands in its final position, a marker is placed on the result and losing chips are swept off the table. Successful wagers are then paid based on stake amount and odds, with a new round commencing immediately afterwards.

Chips placed on numbers grids are called inside bets and include:

Chips placed on combinations located around the grid are called outside bets and include:

The game was changed forever after adding zero and double zero to the wheel, as players make even-money bets and focus on trying to double investments, without noticing the House is continuing to collect revenues. This is due to balls occasionally finding a green colored pocket rather than red or black. 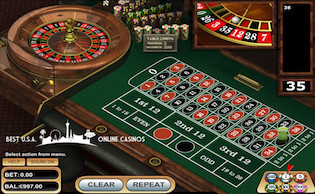 Many different systems were spawned by those determined to beat the 50/50 nature, with most popular being the Martingale System, instructing players to double stakes after every loss. Rationale being increasingly larger antes will eventually pay off and cover preceding losses. Although if unsuccessful, this can deplete bankrolls before salvation spins show up, so it’s not a recommended strategy to employ.

Also, some track table history in search of “hot numbers” that are “due”. Such thinking may be comforting and operators are more than happy to post recent outcomes to help superstitious individuals’s quest for a pattern. However, outcomes are completely independent of everything preceding, based solely on random chance.

Finally, for as long as balls have been bouncing, customers have accused establishments of guiding them into preferred sections to cheat. Perhaps shady croupiers and unbalanced wheels existed in the past, but today’s are engineering marvels devoid of such shenanigans, instilling unanimous confidence they are 100% legitimate.

When first arriving in America, it was double-zero wheels packed onto sailing ships, so consequently there remains a split between European and American versions. All action and payouts are identical, with the only difference being a meatier House edge for American.

Citizens of France were not about to let their history in its origins be washed away in anonymity, so an even more player-friendly variation emerged called French Roulette. Anyone backing “even money” options (even or odd, red or black, 1-18 or 19-36) only lose half of antes should balls tumble into the dastardly zero pocket. Rather than take chips, they may be left imprisoned for the following spin and if victorious, original amounts are returned.

Some places go further still and continue after losing spins, coined double imprisonment, allowing the opportunity to receive full stakes. Imprisonments sometimes continue until a non-zero verdict is realized and when coupled with double-zero pockets it’s referred to as Atlantic City Rules.

The wheel debuting in 1796 had borrowed from Blaise Pascal’s original creation and took elements of other ancient spinning games such as Roly Poly and Reiner (popular in England) and Biribi and Hoca from Italy. Alternating black and red pockets feature numbers in each, not running sequentially, instead grouped to create sections with approximately equal values. Odd numbers between 1 to 10 and 19 to 28 are red, with even all black. From 11 to 28 and 29 to 36 the pattern reverses, with evens being red and the rest black.

Here’s a quick video documenting Pascal’s numerous other inventions, clearly explaining why he is considered one of the most important intellectual minds in history.

Readers were enamored almost immediately via a spirited recount featured in an 1801 novel by Jacques Lablée called, La Roulette, ou le Jour, introducing it across Europe. French brothers François and Louis Blanc ran a small operation in Hamburg, Germany in the 1840s when they decided to liven things up by releasing it with just one zero, slicing House edge from 5.36% to 2.70%.

The Blancs were doing great business until the German government snuffed out gambling in the 1860s, so the brothers packed up their wheel and left for Monte Carlo. There they were instrumental in establishing the principality’s first gaming establishments and single-zero roulette was wildly popular, remaining the European standard today.