Mixed martial arts fans around the country are pumped up for UFC Fight Night on ESPN tonight, with Alistair Overeem against Walt Harris in the main event. Obviously, all best American offshore casinos are listing the entire card, but only a few offer value in their MMA odds for each, so here’s where to get down this evening. Remember lines can change at any time so be quick if wanting to lock in.

Many are focused on Overeem vs. Harris so lets get right to it because everyone’s numbers are close, although one is superior to the rest. Depending on destination, either +115 or +120 is found for slight underdog Overeem, however, top ranked gambling site SportsBetting.ag has a bit of extra meat with +123. Those predicting the fight will go Over 1½ rounds should also book that there to grab a plumper -145.

The penultimate battle has Edson Barboza going up against Dan Ige and again one spot has marginally-better value. It’s over at radically-unique Xbet Sportsbook who put a little more mustard on their line with Ige +120. The total everywhere is 2½, however, their Under paying +110 is undefeated.

Here are current UFC Fight Night lines at MB, complete with totals and times for each. Thankfully, it looks like a few North American professional sports are returning (for now), so be sure to make the most of the evening. 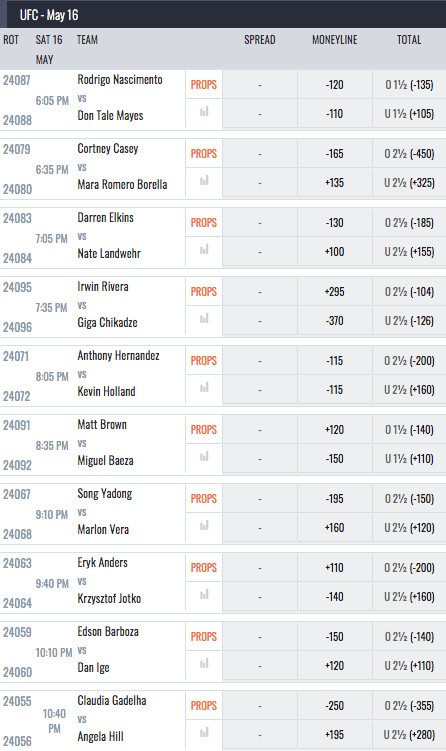