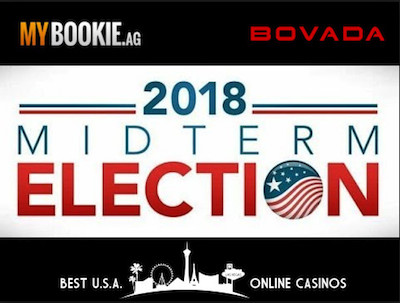 Professionals know money can be placed on pretty much anything nowadays, so it’s no surprise the 2018 U.S. Midterm Elections next week are also available. First to post odds was of course MyBookie, regarded as one of the best offshore sports gambling websites in the industry, led by maverick Head Trader, David Strauss. Stakes are accepted on everything imaginable, even fulfilling unique requests on Twitter for pinball, eSports, and various other events.

He’s mentioned specifically because shortly after Strauss’ aggressive interview on Breitbart Radio was broadcast this past Saturday morning, “MB” received a flurry of activity prognosticating Democrats control The House of Representatives, bragging he actually favored Republicans to win and accordingly priced Dems like an underdog. The line then swung drastically as always-bombastic Strauss admitted on air they would facilitate action up to $1,000 and if polls are correct, this is an easily attainable profit. However, he claimed it was these same surveys that originally led him to label Dems dogs, asserting the polling process is skewed by unemployed people answering landline phones, leading to an inherent liberal bias within the questions themselves.

Consequently, he now has both Democrats and Republicans returning -120 for the House next Tuesday, so perhaps David just can’t pump the brakes following his bold proclamations. Nevertheless, all hotly-contested senate races are listed, such as Delaware’s Tom Carper (D) -800 vs. Rob Arlett (R) +500, Florida’s Bill Nelson (D) -120 vs. Rick Scott (R) -120, and Indiana’s Joe Donnelly (D) -125 vs. Mike Braun (R) -105.

Almost every senate seat from Hawaii to Maine can be staked, with popular names on ballots alongside Independent candidates of note. For example, Maryland features Ben Cardin (D) -1000, Tony Campbell (R) +600, Arvin Vohra (L) +2000, Neal Simon (I) +2000, and Edward Shlikas (I) +2000, creating an extremely crowded field.

In fact, MyBookie’s bitter rival, Bovada, didn’t even bother posting Vermont race futures as they believe it’s a foregone conclusion Bernie is winning. Although, perpetually-frightened Head Linemaker, Pat Morrow, went a few sad steps further by refusing to hang numbers for countless long shots, taking them off the board completely (and therefore, any associated risk).

Those requiring more information beforehand should check out this expert synopsis of U.S. Midterm Elections by CNN detailing what’s involved and how it all works. It’s obviously not fake news but President Trump probably still wouldn’t approve due to the source. Regardless, it explains everything important in plain English.

If not needing a primer for November 6th, go read this exclusive MyBookie review and decide whether to throw down on these crazy props. Most will wholeheartedly agree that betting on American politics is inevitably fun since it’s the dirtiest “sport” played today.