One of the premier summer events starts today and The 2019 U.S. Open promises to be an action-packed few weeks of top tier performances. Therefore, this betting guide reports everything needed to be known, focusing on the best tennis sportsbooks taking action and where to find great odds.

Starting with men, it’s no surprise Novak Djokovic is the hands-down favorite with every site posting +110, although Intertops has +115, if interested. He’s followed by Rafael Nadal (+350) but solid value at both aforementioned destination as well as MyBookie at +400.

It’s universally accepted third spot belongs to the incomparable Roger Federer (+550) but surprisingly-generous Bovada lists +600. Things finally get interesting at #4 since it’s anyone’s guess who should be favored from this point on and the various numbers prove it. Alexander Zverev is fourth at a few places paying around +1200 but Bovada hung +2000, making this a fantastic advantage wager. They also have top numbers for Nick Kyrgios (+2800), Milos Raonic (+3300), Hyeon Chung (+6600), and Jack Sock (+15000).

Moving over to the women’s side, obviously Serena Williams is the favorite, however, Intertops is the only book offering +450 compared to others at +350. If backing her, it’s definitely worth a visit. Consensus is reached again amongst sites for #2 and #3 with +700 for Simona Halep and +800 for Naomi Osaka.

Then anyone staking Sloane Stephens to win The Open should go straight to Bovada for +1800 instead of odds of +1600, even dropping down to +1000 elsewhere. This is definitely one of the top advantage plays of the week. Speaking of value, those backing Maria Sharapova should again look to Intertops for +5000, easily beating the +2800 most others posted. They also have the sweetest numbers for Madison Keys (+1600), Petra Kvitova (+1800), Venus Williams (+6600), and Coco Vandeweghe (+8000).

However, anyone salivating for a big deposit bonus should head over and sign up at ethical and law-abiding MyBookie betting site since they’re offering twice as much as everyone else. A 100% match up to $1,000 is currently posted as opposed to a 50% match extended elsewhere and they even accept Bitcoin and other cryptocurrencies.

So here are their current odds to help compare numbers while line shopping. Good luck! 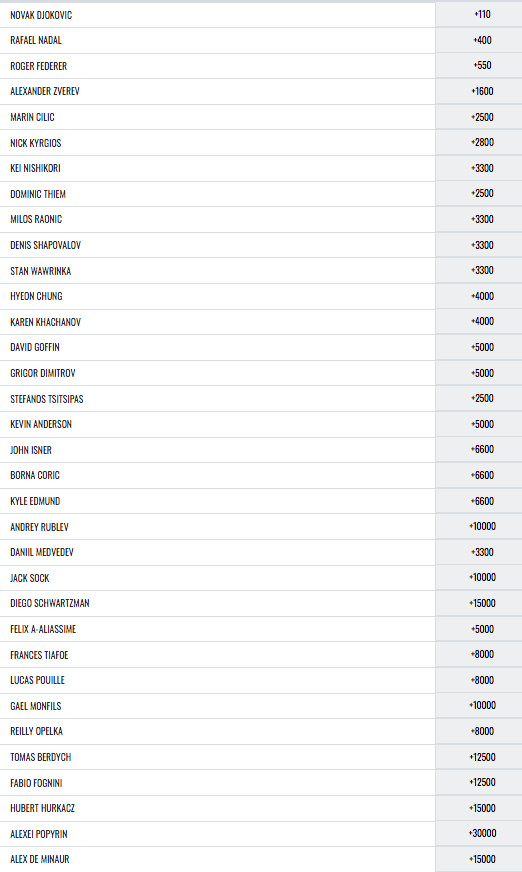