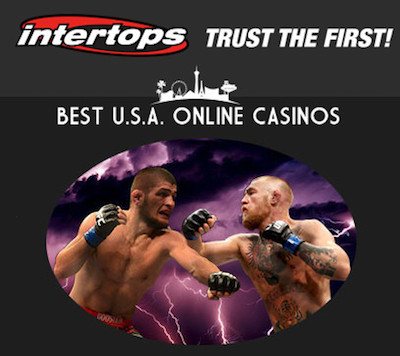 One of the best UFC fights of the year is sure to be Connor McGregor vs. Khabib Nurmagomedov on October 6, 2018 and now completely-reviewed Intertops Sportsbook is offering members some great promotions to enjoy. First of all, bookmakers have reduced juice for this matchup and guaranteed they have the best odds of anyone, with McGregor currently sitting at +140 to win and Nurmagomedov paying -155. It looks like experts are projecting the fight will be quick since total rounds over/under is 2.5, with the over paying +100 and under at -130.

Besides reduced juice, they’re also extending a free bet promo available to anyone laying $50 or more on the fight. If the person loses, immediate cash back is issued depending on which round it ends in, with amounts increasing the longer it goes on. (Which totally makes sense considering they’re convinced it will be short).

If it ends in Round 1 $10 is given back, as sums then go up by $10 at the end of each subsequent round, with $50 being returned if called before Round 5 is finished. However, if it goes the distance, a meaty $100 will be refunded, guaranteeing profit either way. Just to add a little spice, Intertops bookies have also made offshore gambling news for crazy proposition bets such as, Will McGregor arrive at the octagon with a dolly? (+25000), or Will Brock Lesnar get into the octagon after the fight and push Dana White? (+3300), as well as Will the referee be knocked out during the fight? (+5000). It’s even possible to stake long shot wagers like McGregor retiring while still in the ring, or him showing up to the press conference on time.

In addition to all these bizarre possibilities, a full sportsbook waits with lines for popular American leagues like NFL, MLB, and NBA, as well as every major boxing match around the world. They already have posted odds for the Mayweather vs. Pacquiao fight so get down on that too while there, if interested.

The best part of it all is they’re currently extending $1,000 welcome bonuses, so go signup for a free account and deposit at Intertops today and get in on the action.