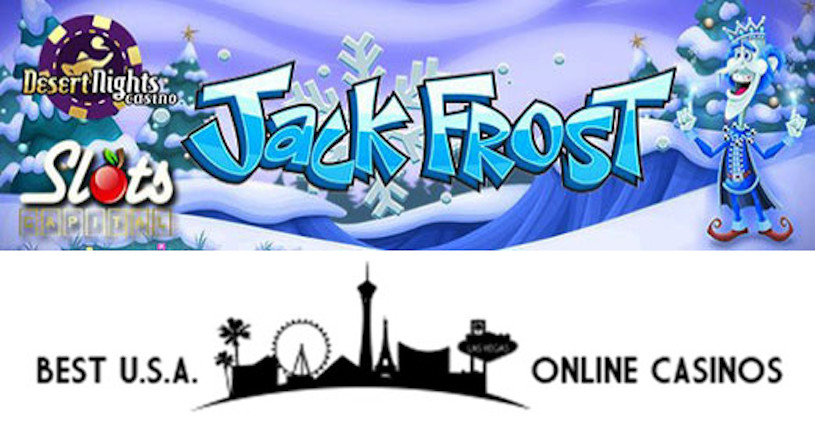 Tis’ the season to be giving and the Deck Media group of websites is keeping with the spirit of things by offering players across the U.S. some great promotions for the rest of the month. These offers are strictly for those who like playing online slots and it’s a great way to try out the new games that were released last week.

The first Christmas promo is actually available at two Deck Media properties, Desert Nights and Slots Capital. For anyone who’s never heard of these places, you can read our exclusive review of the Desert Nights Casino for more information on what you’ll find there. The new release being promoted is Jack Frost Slots from Rival Gaming, which is a fun holiday-themed adventure that will have you battling the cold in new and exciting ways that will reward you for being victorious.

You’ll be teaming up with Jack Frosts’ brother, “Harold Heat”, to kick the cold in the butt and take over the weather to blast some sunshine across the frigid nation. There are tons of winter symbols like skates and ski goggles while Jack is in control but once Harold swoops in he’ll melt them all into summertime ones like sunglasses and coconut cocktails. As the battle rages there will be tons of free spins and sticky wilds flowing from every angle ensuring that the action never ends.

Bonus Codes for Slots Capital and Desert Nights for December 2018:

The other great offer up for grabs this month from Deck Media is courtesy of the Red Stag Casino for U.S. players, who are a relative newcomer on the scene but are starting to make waves. They’ve got a featured game for the rest of December called Stocking Stuffers Slots, which was just released by the WGS software company and is already getting rave reviews from the player community. It’s obviously a Christmas-themed slots as well, featuring all of the traditional yule time cheer throughout its symbols.

However, the big twist on this release is that there’s a progressive jackpot that’s guaranteed to go off every time it reaches $2,500, ensuring that the Christmas cheer will be constantly dished out for anyone playing it. You might be one of the lucky ones because now can try it out for free with a $10 chip if you go register with “The Stag” before December 30, 2018. They will also give you a huge match bonus of 425% to get in on the action on any deposit over $25 before New Years Eve.

The clock’s ticking so grab this great offer soon, or go visit the Desert Nights Casino now and help get rid of Jack Frost once and for all. We all could use some sun and a nice coconut cocktail to battle this icy weather!