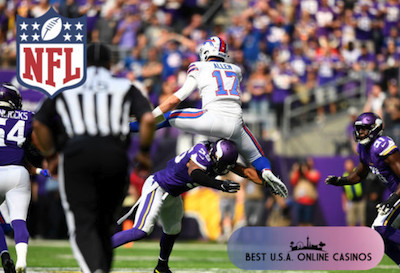 Another weekend of professional football action is complete and some huge surprises came in for Week 3, ensuring the best NFL sportsbooks took a beating. The biggest shocker of all has to be Buffalo rolling into Minnesota and winning by three touchdowns after being a 17 point Underdog before kickoff. Rookie quarterback Josh Allen looked fantastic as he jumped over the Vikings’ defensive linemen like they were children. Obviously, anyone helping themselves to the generous Bills moneyline beforehand finished the afternoon very happy indeed.

Some smaller upsets even rewarded daring gamblers with a little money for their bravery. For example, not many people thought the New York Giants could go into Houston as 6 point dogs and be triumphant but that’s exactly what they did with Eli Manning throwing 297 yards and two touchdowns. This leaves the Texans winless following numerous experts predicting them to take the division to start the year.

Sunday Night Football capped things off with the second largest upset, Detroit slapping New England 26 to 10, putting both teams at 1-2. This was rookie head coach Matt Patricia’s signature game of the season as he was facing his old squad and mentor Bill Belichick. Even if the Lions are only occasionally victorious, they’ll still be able to hold onto this memory, as this was one they really wanted. The lesson here as always is to never bet against a +7 Home Dog (usually).

All of this action of course began with Cleveland winning their first game in over 600 days on Thursday Night Football against the Jets, setting the stage for a tumultuous 2018 NFL Week 3, filled with crazy results.