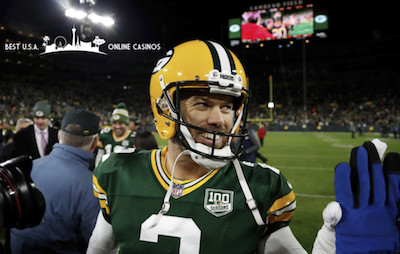 The rollercoaster ride continued through NFL 2018 Week 6 with tons of exciting finishes and lots of money exchanging hands. Everyone who held their breath after throwing down on Arizona +10½ found out just how valuable a half point can be, with Minnesota only winning by 10 and allowing the underdog Cardinals to cover. The lesson here as always is double digit spreads are very hard for favorites to prevail against since both teams are stacked with professionals who take pride in their performance.

Speaking of covering large numbers, Buffalo came through again last Sunday and managed to lose to Houston by 7, not needing the 10 bookmakers gave them. Anyone who watched knows the final score is deceiving and the Bills should have actually won outright but beat themselves again. Nathan Peterman threw a “Pick 6” with under 2 minutes left and now it looks like Buffalo will be searching for a new quarterback again this offseason.

A Monday Night Football showdown between Green Bay and San Francisco in Lambeau Field ended things off, with the visitors getting 9½ due to a terrible record and slew of injured players. Surprisingly, the 49ers were solid the entire evening and the Packers were ultimately given a gift of a phantom penalty on cornerback Richard Sherman to extend the final drive. Aaron Rodgers then did what he always does and got 21 yards on the next play to set up a Mason Crosby field goal as time expired, winning the game 33-30. Just another “fairytale ending” to add to his resume.

Those wanting in on this week’s NFL action should head over to our section detailing best current USA online sportsbook bonuses and promotions that boost bankrolls when signing up for new accounts. Staking more underdogs for less is always a good call.