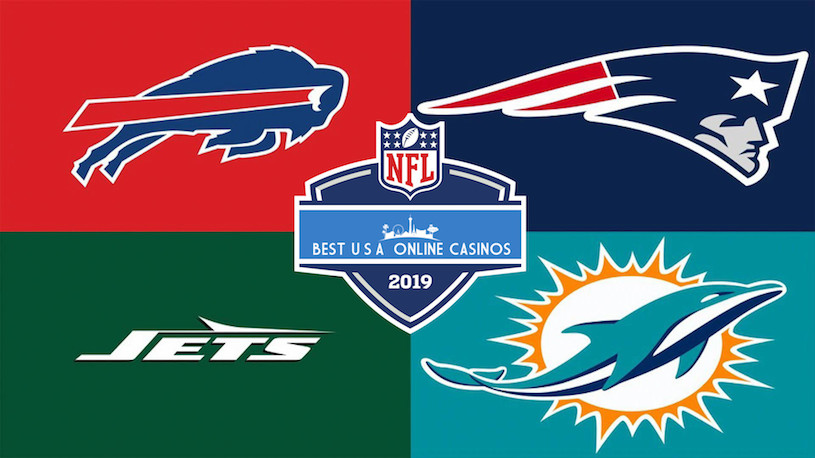 Why even bother reading about the AFC East? The Pats win it again, everyone else misses the playoffs, repeat until we’re all dead. It’s crazy to realize that until Brady retires, the rest of the teams really don’t have a chance – it’s sad but true.

Fortunately, this division provides tons of excitement in other ways: primarily through knowing when to bet against the other three in survivor pools. It varies slightly each season but for the most part it’s a good idea to not bet against Miami at home and realize that Buffalo can beat anyone, anytime, anywhere. Well except for the Patriots because Brady seems to hand them two losses every year like clockwork (except for 2016).

The Jets, Bills, and Dolphins should win 5, 6, and 7 games in 2019 but it’s hard to assign victories since every division match up is a coin toss. Be careful when getting down in the AFC East – the bottom three teams are always hard to predict.

At first glance it looks like the Bills Mafia might have more to cheer about before games at the tailgate as people are getting thrown through tables. They’re huge long shots to do anything at all…including reaching 8 wins. A season win total over/under of 7 seems fair – especially when their starting quarterback is getting odds of +20000 to end the season with the most touchdowns. At least Rich Stadium is easy to get to and the parking lot features some of the best food in New York State – that’s certainly something to brag about.

Looks like another 6-10 season with the best tailgate parties in the country, hosted by the most passionate binge drinkers in the nation. At least Buffalo fans can look forward to “Mustard Dude” every Sunday.

Look out South Florida! Your team is being led by no other than Ryan Fitzpatrick, otherwise known as “Fitzmagic”. Not even lightning and hurricane winds will stop his Ivy League arm so get ready for some winning this year. He will be absolutely unstoppable for two weeks and the fizzle out into obscurity. It has been written.

It can’t be a good sign that the Dolphins have two quarterbacks listed at MyBookie for “Most Passing Touchdowns”. This season should be another disappointing one for everyone involved. Especially season ticket holders.

These are the second worst projections in the National Football League for 2019, only slightly ahead of the Washington Redskins. At least the Heat should make the playoffs this year.

It’s no surprise that the bookmakers have had the Patriots as one of the top favorites to win the Super Bowl since March when it was confirmed that both Brady and Belichick were returning for another season. They’re slightly behind Kansas City at a few books which could somewhat be defended, but as long as #12 and Hoodie are in uniform they’ll be going at least to the AFC Championship game.

What can we say that hasn’t already been said? Just send them the AFC east banner now and fast forward to a KC / NE AFC title game, please. One of the best yearly value bets is the Monday after their first loss when they drop down the list of Super Bowl favorites. Anyone who thinks that Brady doesn’t have it in him again obviously doesn’t know about his strict diet – do yourself a favor and go check it out.

The Jets are coming off of a miserable year that saw them finish last in the division and they’re hoping to become competitive again. “Hoping” being the key word in that last sentence.  Based on the astronomical odds below, the one bright spot in 2019 might be rookie Quinnen Williams. You should be able to safely bet against this team all year long, however, watch out mid-season as they always pull themselves together to win one or two games against much stronger opponents. The over/under for season wins looks insanely high – or does Le’Veon Bell by himself add 3 more victories for this dumpster fire of a team? We’ll have to wait and see.

There’s nothing to get excited about for Jets fans this year – unless Rex Ryan and the Butt Fumbler come back for a second run on Broadway. Take this season off from football and start working on that movie script you’re always talking about. Hopefully Adam Gase is fired by the time you finish it.