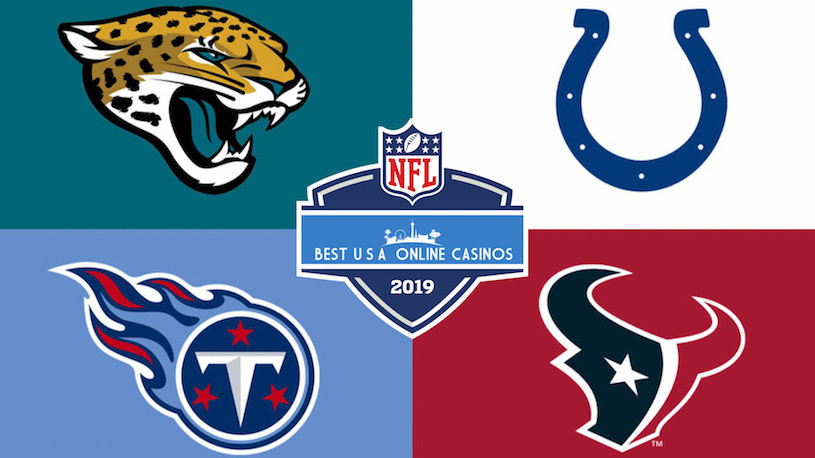 Welcome to the rootin’ tootin’ AFC South where every team has a chance of winning the division each and ever year – especially now that the Jags added Super Bowl Champion Nick Foles to their roster. No one knows how things will go this season but one thing’s for sure, there shouldn’t be too much of a win differential between first and worst.

To spoil the surprise of a few of the numbers below, David Strauss at MyBookie has the win totals in the division looking like this come January. Yes, he’s basically saying that there’s a very good chance that every team could be 8-8 to finish the year…do you believe us now that this is the hardest division in football to predict?

So what the heck are we to make of that? Well, exactly what we should make of his odds for 2019 AFC South champion:

In short, he has no freakin’ clue what’s going to happen so neither should you.

It seems like everyone in the world has given up on the Colts after Luck’s retirement and this just might be the spark the team needed. If there was ever a locker room where the “nobody believes in us” speech was accurate, it’s in Indianapolis this year. The only problem is that coaches in the locker rooms of Houston, Tennessee, and Jacksonville could also be pulling this out and have it apply. Close your eyes and throw a dart.

Will this team ever get on solid ground? It seems like they go into each season with high hopes, only to have them dashed with sad injuries or underperformance. Or they’ll have an amazing season (like last year) and get booted out in the first round (extra harsh since it was at the hands of a hated division rival).

These guys usually like to start off slow, exactly like San Diego used to, and last year was no different with an 0-3 record in the books before rattling off 9 wins in a row (IND, DAL, BUF, JAX, MIA, DEN, WASH, TEN, CLE) before losing a squeaker to the Colts 24-21 at home. They only lost once more to the Eagles after that (32-30), meaning that they were only 5 points away from an amazing 13 game winning streak. These guys might be good this year.

With a roster featuring those studs they should definitely repeat as AFC South Champions in 2019… as long as they stay healthy. Hopefully the loss of star running back Lamar Miller in the preseason will be the only bad luck they encounter and fans across the nation can enjoy seeing J.J. Watt on the field in December.

The Colts went from “Super Bowl Contender” to “Franchise in Transition” for the 2019 season after Andrew Luck shockingly retired a few weeks ago. This was unfortunate because their 2018 campaign was inspiring, to say the least. After starting the season 1-5 and being left for dead, they rallied to win 9 of their last 10 (beating BUF, OAK, JAX, TEN, MIA, HOU, DAL, NYG, and TEN), with Luck looking like a Hall of Fame QB in the process.

The good news for Colts fans is that Jacoby Brissett has had flashes of greatness and Adam Vinatieri got approval from the league to use his walker on the sidelines. This could get interesting.

These guys have nothing to lose and some talent to go along with it. Don’t bet against them lightly. And yes we’re joking about the walker but good lord…Vinataieri turns 47 years old in December. His discovery of the fountain of youth might be the last bit of inspiration the Colts need to get ahead of the pack.

What a difference a year makes…and then another one. Some experts had the Jags in the Super Bowl last year before the start of the season but instead of reaching the playoffs they just imploded and let down all 800 of their fans.

Everyone who piled on Jacksonville in Week 4 of 2018 against the Jets in their Survivor Pools were happy they got them out of the way since they went on to lose the next 7 in a row (KC, DAL, HOU, PHI, IND, PIT, BUF) before smashing the Colt’s win streak with a “decisive” 6-0 victory at home. They then lost 3 of the last 4 and quietly packed up their lockers for the season, ensuring Blake Bortles’ career with the team went out with a whimper not a bang.

The entire nation is breathlessly waiting to see what Nick Foles and his championship pedigree can do in Jax. It’s probably the best to stay away from them for the first few weeks until we get an idea of how this team is gelling.

They’ll be fun to watch with Foles chucking it down field all season but it probably won’t be enough to get ahead of the Texans…or the Colts. Either way we’re just happy to finally have a reason to watch a Jags game.

Which Titans team is showing up in 2019? Your guess is as good as anyone’s but no matter which it is, they’re probably still miffed that Marcus Mariota watched the last game of 2018 from the sidelines. Losing to a hated division rival is one thing, but Indianapolis whooping them 33-17 in primetime to snag the last playoff spot for the year had to sting (although many fans were ecstatic that Blaine Gabbert’s 2 INTs got him banished to Tampa Bay in the offseason).

Expect this team to have a bit of an attitude right out of the gate.

This smells like a solid 8-8 campaign in 2019 with a few disappointing losses along the way so it’s probably not safe to bet on or against them. That said, perhaps this is Mariota’s breakthrough year, which we’ll know for sure by Week 3. Cleveland, Indy, and Jax should be enough of a litmus test for this squad: remember to reevaluate your opinion of them at the end of September.