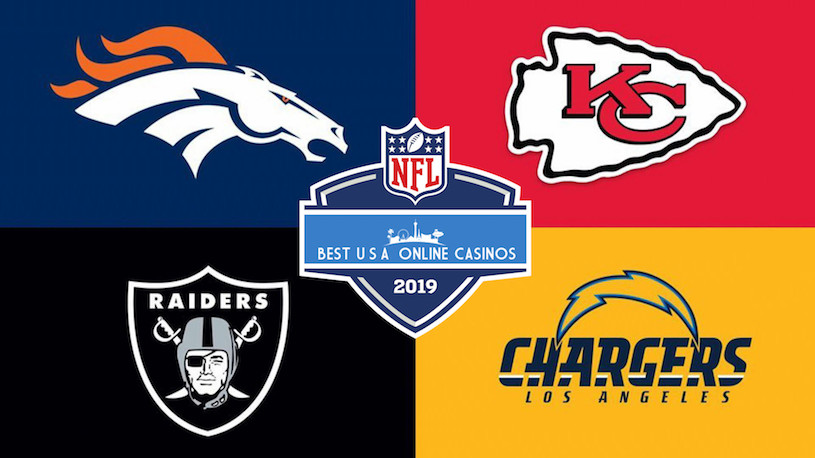 One of the most exciting and historic divisions in football looks like it’s going to be a two team race in 2019, well, at least according to the “experts”, but what the heck do they know. Most people love this division because the teams are always playing in the late afternoon games allowing more time for screaming at the television as the Raiders decide to play hard enough to cover the spread and ruin your 5 team parlay. It happens every year.

Hopefully, the Chargers relocate back to San Diego mid-season and restore balance to the NFL Universe. How in the hell did the league ever approve that move in the first place? Oh right – money.

Even though Denver and Oakland will never fully lay down and roll over, there will still be plenty of times to bet against them – just make sure you do it in September or October.

Football legend John Elway continues to lead this franchise, which is well-deserved after he was personally responsible for delivering 3 Super Bowl titles to The Mile High City throughout his lifetime. It’s hard to imagine that they’d ever fire him but goodness gracious, how much slack are they going to give him? If Joe Flacco isn’t the magic potion the Broncos needed to get back to the playoffs in 2019, Elway might end up as an analyst on the NFL Network. (He’d be great.)

What really killed the Case Keenum (now with the Redskins) campaign last year was hitting losing skids and not being able to snap out of them. After starting the season 2-0 they lost 4 (BAL, KC, NYJ, LAR) before flip flopping their way to a respectable 6-6 record, just in time to finish off the year by dropping four straight (SF, CLE, OAK, LAC). With an over/under for season wins of 7, it doesn’t look like the bookmakers give them much of a chance to do much better in 2019.

With a roster this diverse and young led by a Super Bowl winning QB, Denver is either going 5-11 or 11-5. Middling at 7-9 just doesn’t pass the smell test so we’re expecting a surprise in either direction.

Expectations are sky-high for this squad in 2019 and this is the year that many see the Chiefs finally returning to the Super Bowl. After losing to New England at home in the AFC Championship in overtime last January they’re either going to have a hangover or a chip on their shoulder. We’ll know which one it is at the conclusion of Week 6 after the Texans game.

After only losing in 2018 to LAC, NE, LAR and a tough one in Seattle, these guys proved they know how to get the job done. If they can block out how last season ended they should easily go through most of the league without an issue.

Many places have them listed as the current favorite to win the 2019 Super Bowl so expect them to do some damage before inevitably losing to the Patriots (+325 to win AFC Championship) at home again in the title game. Don’t blame the Pats, blame Father Time’s inability to find New England on a roadmap.

We weren’t going to include this team out of respect for the great city of San Diego, but unfortunately gambling has to come first. If it’s any consolation, they might suffer from “The Curse of the Whale’s Vagina” and never have a 10 win season again. In any event, this should be their last chance for quite some time.

Philip Rivers is getting dangerously close to the end of his career and if you’ve ever seen him on the sidelines after one of his receivers dropped a pass on 3rd down, you know this guy wants to win (and should probably get some anger management counselling). Most people thought that his best chances of going to the Super Bowl were behind him but the Chargers’ 2018 campaign was outstanding. Their only four regular season losses were to division rivals Kansas City and Denver, as well as the Rams and Ravens. That’s nothing to be ashamed of at all.

However, 2019 is starting off shaky with the team deciding not to negotiate with star running back Melvin Gordon, effectively calling his bluff or telling other teams that he’s on the trading block. This might leave a hole in their offense that’s just too big to fill. The good news is that the first half of their schedule is relatively easy so that might give them enough time to figure things out…whether Gordon is on the field and dressed for them or not.

If you thought you saw Philip Rivers shouting at his teammates a lot in previous years, just you wait – this his 16th season in the league and he doesn’t have many more shots at a ring. The key will be how the team responds to his petulant outbursts late in games when times get tough. They could feasibly finish below .500 in 2019 if they don’t find their chemistry before October.

This will probably be the last year for this team in Oakland and it’s looking to be a sad one. Derek Carr played the entire 2018 season but really didn’t “wow” the nation like he did before his terrible injury. It’s always fun to watch Raider Nation get crazy so hopefully they pull it together enough to give them a few home wins on their way out the door.

However, after beating CLE by 3 in OT, ARI by 2 points, PIT by 3 at home, and a “no one cares victory” over DEN in Week 16, it doesn’t look like there’s much to build on here. Of course, new superstar Antonio Brown might have something to say about that…

Whether or not this is their last season in Oakland, we hope they get enough fans at each game to finally take the tarps off those upper bowl seats (CBS loves to swoop by them when returning from commercial breaks – the director is probably a Broncos fan). It’s always sad to see a team relocate but if they’re not selling tickets, it’s kind of understandable.

More than likely the most interesting stories coming out of Oak Town this year will involve Burfict and Brown teaming up to wreak havoc on the champaign rooms across the Bay Area. The unofficial over/under for “number of arrests” by the duo has been set at 3.