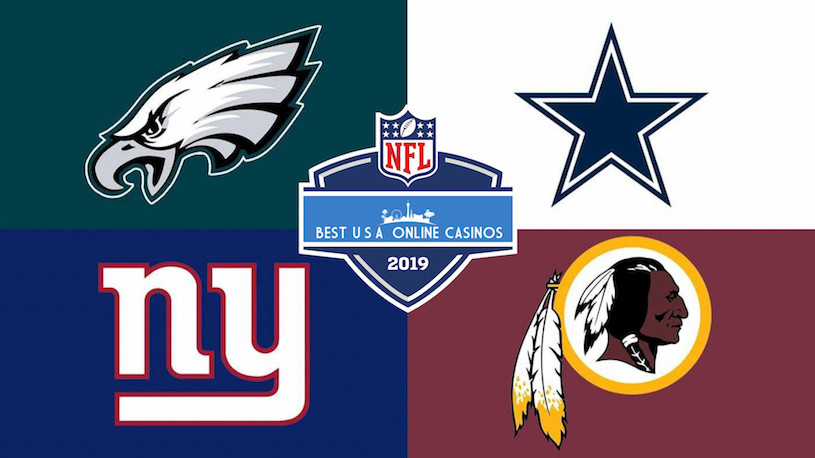 The NFC East is always up for grabs although the Giants and Redskins have been bottom-feeding for a few seasons now. Of course, we all know that New York can seemingly wake up and go win themselves a Super Bowl anytime they feel like it. However, that seems almost next to impossible in 2019 as Eli fades into retirement mode and appear to be taking the year off.

The Case Keenum Era begins in Washington, assuring them of a minimum of 3 wins this year. The Eagles traded away the best “back up” quarterback in the world and the Cowboys have been experiencing personnel issues since July. Looks like we’ll have another 10-6 NFC East representative in the playoffs again – or maybe even 9-7. As always, never pick one of these teams when they’re playing within in the division as 3-10 squads habitually rally for upsets in late November.

When you’re pulling legends like Jason Witten out of retirement with the possibility of a Super Bowl ring you know there has to be something special going down in “Big D”. However, salary disputes and in-fighting are threatening to spoil the 2019 season before it even kicks off. This team will either go to the Super Bowl in February or implode and go 5-11. Book it.

Losing a winnable game against the Rams in the playoffs last year stung but not as much as their opening day stinker in Carolina. At the end of Week 5 we’ll know where this team is at, having faced two division foes plus the Saints and Packers.

Jerry Jones owes it to Witten to regain control of this franchise and make a solid run. Or Jones could just do all Cowboys fans a favor and completely retire and only come out twice a year to have his son-in-law clean his glasses in his luxury suite. These guys can lose to anybody in the league – even Miami – so proceed with extreme caution.

The Giants traded away the best wide receiver in the league (to the Browns, no less) which basically signals to the fanbase that this year’s campaign is simply a “Farewell Tour” for Eli Manning. He brought the franchise 2 Super Bowls, both against a hated Boston team, so the respect is deserved.

Besides a decisive win in Washington last year this squad beat HOU by 5 in Week3 and squeaked out 4, 3, and 3 point wins against SF, TB, and CHI respectively. It’s hard to see them putting up much more of a fight than that this season. Tons of great opportunities to pick against them in your 2019 Survivor Pools.

It seems kind of weird that MyBookie is projecting them to do better this year than last. Watch out for the trap – they love to bait gamblers from New York (as well as Boston) knowing they’ll throw down money to back their team in even the most outrageous of circumstances. Take the under 6 season wins and hope for good draft selections in 2020.

Eagles fans got their Super Bowl victory against hated New England a few years ago so the desperation wafting from Philly has subsided and the general scent of the town has once again returned to cheesesteaks. This bodes well for Carson Wentz since the pressure will be reduced slightly, especially since he can’t fall back on Wonder Boy Nick Foles anymore (who came in on Week 15 last year and saved the season with 3 straight wins throwing for 270, 471, and 221).

With so many veterans on defense it seems reasonable that this group could keep opponents from exploding on them throughout the year, giving them a solid chance to win each week. Wentz should wobble his way to at least 9 or 10 wins, giving the Eagles a shot at the division title or a Wild Card birth. When they inevitably have a misstep and lose Week 8 in Buffalo it’ll have gamblers screaming to the heavens. Trap game.

After beating ARI, GB, CAR, DAL and the NYG in 2018 to get to 5-2, things got a little shaky before the entire season crashed and burned with Alex Smith’s horrific injury in Week 11 against the Texans. The team’s only success from that point on was a 3 point win at Jacksonville between two teams still in shock that their hopeful seasons had become nightmares.

Expect to see at least 2 starting quarterbacks for the Skins in 2019 and possibly one or two more. It feels like this franchise might be a little cursed due to their monicker and cocky owner so don’t be surprised if there’s another season full of trauma and sadness.

Boasting some solid veteran talent, this team should remain prideful enough to keep it close to a .500 season, especially since they’re facing MIA, BUF, NYJ, DET, CAR, and NYG x2. These guys can ultimately beat anyone on a good day so don’t go against them thinking it’s a “sure thing”.