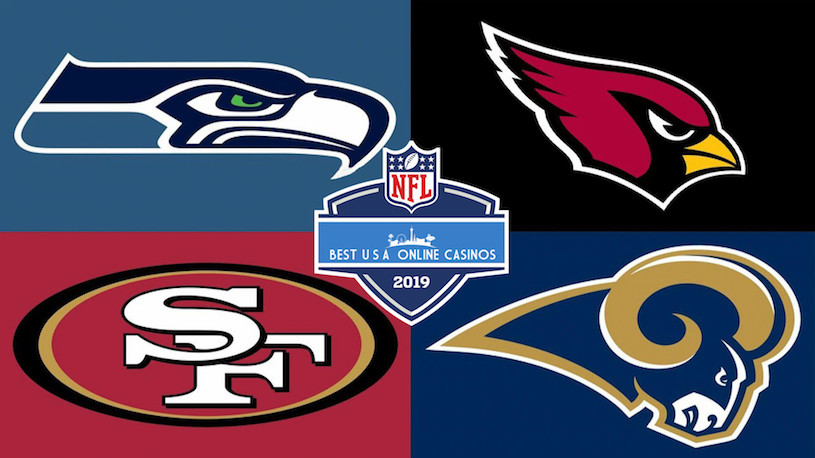 Here we have another division that shouldn’t be changing too much from last year. The Rams should still dominate, the Seahawks will still under achieve as they over achieve, and then there’s two other teams nobody watches that we can’t remember the names of.

We’re of course joking but it is getting tiring watching the Cardinals waste Larry Fitzgerald’s career while the 49ers haven’t been relevant since Colin Kaepernick left. The only highlights either franchise has generated over the last few seasons are when they’re involved in high-scoring affairs and knocking off a superior team with a last second touchdown (and booting out multiple Survivor Pool entries in the process).

The only realistic twists that could come out of the NFC West in 2019 are the Rams stumbling and the 49ers winning more than 6 games. The Seahawks are slightly improved and could easily end up at the top of the standings in December. The Cardinals will be a lot more interesting but their record won’t be changing too much in the process.

A new era begins in Zona with the arrival of Kyler Murray at quarterback and he’s coming in with some very high expectations. Although, after only winning 3 games last year it’s impossible for Cards fans to be disappointed, no matter what happens. Especially considering that if San Fran wasn’t in their division to beat twice they only would have had a single win in Lambeau against a reeling Green Bay team in Week 13.

That’s all in the past now though, with the addition of some respected veterans and an assembled cast that could punch their way into the playoffs if they got a few breaks. Of course, it looks like they’re going to have some kicker issues throughout the year and 3 points could make the difference in December in back to back road games against Pittsburgh and the resurgent Browns.

This season will be a learning curve but their 2020 campaign could be impressive.

Between Fitzgerald, Crabtree, and Suggs there’s 44 years of NFL experience – combine that with a likeable rookie QB and no one will be angry if a miracle season rises up from the desert. Hammer that home in Week 3 against the Panthers if you’re feeling frisky.

It’s important to remember that “technically” the Rams shouldn’t have been in the Super Bowl last year and were only there because a referee made a bad call, ruining New Orleans’ storybook season. Everyone knows that “karma’s a bitch” and this seems like a team that could be primed to receive some blowback from the Gambling Gods in 2019.

There was some mystery surrounding Todd Gurley at the end of last year and a few observers are wondering if he’ll have the same impact, able to bust out for 100 yards on a whim. They could start off rocky so it’s best to save them in your Survivor Pools for Week 8 against the Bengals.

Is it just us, or does this smell like it could be a replay of the 2016 Carolina Panthers who won 6 games after losing in the Super Bowl the season before? Meh – it’s probably just us.

The promising rebuild of the 49ers was over in Week 3 last year with the season-ending injury to “fun-to-watch” quarterback Jimmy Garoppolo. The team then lost 6 games in a row while accounting for 66% of Arizona’s season win total in the process. Humiliating.

However, there were signs of life in December as they rallied at home for two back-to-back wins against Denver and Seattle, needing OT to finish off the Seahawks and tasting a bit of satisfaction in vanquishing a hated division foe.

The 2019 campaign hasn’t seen a great start with RB Jerick McKinnon going out for the season after tearing his right ACL in practice. It’s now up to Jimmy G to save the day – time will tell if he’s up to the challenge. (Spoiler alert: he’s probably not up to the challenge.)

This team just doesn’t seem to have much fire power on paper, especially considering that Sherman (Year 9), Gould (Year 15), and Staley (Year 13) are close to the end of their careers. Those three will have to find the fountain of youth and have Garoppolo put up miraculous numbers to make any kind of run towards a postseason birth.

This doesn’t seem likely as Bill Belichick is batting 1.000 when it comes to dumping players before their stock falls. Plus, the Niners play the AFC North this year which should hand them at least 3 losses.

You know these guys are still bitter about losing the Wild Card game in Dallas last year by 2 points, made even worse by the fact that they beat the Cowboys by 11 at home earlier in the year. It was a heartbreaking end to a stellar season that had them 3 points away from finishing with a streak of 7 wins (only losing in San Fran by 3 points in OT in Week 15).

In fact, a strong case could be made that their final record doesn’t really reflect how good this team actually was in 2018. Sure they had 6 loses but 2 of those were to eventual NFC Champion Rams (thanks to a referee’s assist, of course), and then another “L” came from the Chargers who finished with 12 wins.

It’s hard to ignore a season-opening loss in Denver by 3 followed by a 7 point failure in Chicago, but those could be explained away as a new-look team finding their feet. In any event, Seattle might be getting back to a dominant form in 2019 if they stay healthy and focused.

Fans in Seattle would love to see a “Legion of Boom II” and the Clowney trade might have sprinkled some seeds to grow just that. On the other side of the ball Wilson and company should be able to keep things stable and finish in the top half of the league for points generated again. Although, they’re obviously going to need some productivity out of their young receiving core to help take the load off of Lockett if they want to go deep into the playoffs.

In any event, thanks to their weak division they should get at least 9 wins and one more crack at a post season run. With a championship pedigree, anything’s possible in the Pacific Northwest this year – including avenging the coach’s play calling last time in the Super Bowl.