Sometimes the universe works in mysterious ways and this week was no different. Just moments after we had reported that Intertops removed their special Bitcoin bonus earlier in the week, we were notified that another operator actually increased theirs. Many will be interested in hearing about this offer because they’re a quiet website owned by Deck Media, not usually marketing externally.

This place has actually been open for a few years but gets very little press, even though they’ve slowly been winning over players from all over America. Those unfamiliar should check out our expert review of Red Stag Casino to learn all important details beforehand. 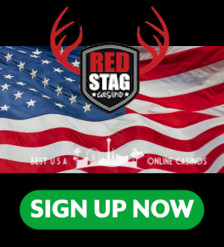 “The Stag” has long-offered large rewards to both new and returning players, also hosting one of the most exciting VIP programs available, with different tiers named after alcoholic beverages such as Beer Club, Tequila Club, and Whiskey Club. Now they’re giving U.S. clients an early Christmas gift with a Holiday 500% Bitcoin Welcome Bonus, raised from 300%, available until December 13th, 2018. Lucrative incentives like this arrive occasionally, but if those wanting to deposit and gamble with Bitcoin this month will definitely want to take advantage.

The 500% match has a maximum amount of  $800 on any transfer of $25 or more, playable on any of their great Las Vegas style table games, video poker, or slot machines. Simply enter USA casino bonus code “CRYPTOSTAGS” when in their cashier and initiating your first real money transfer.

So head on over to Red Stag today to boost Bitcoin bankrolls and enroll in their funky, boozy VIP Program. Bring on the rum and eggnog!