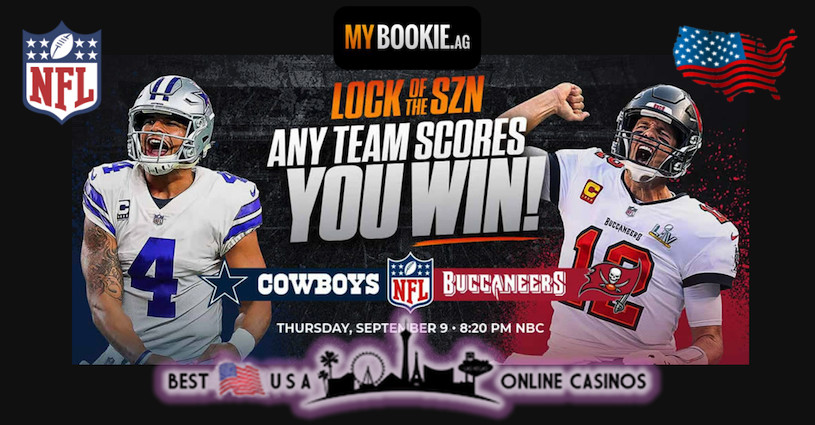 Things have been very quiet over at #1 Ranked USA MyBookie Sportsbook lately as neither a survivor pool nor SuperContest was announced yet, but they’re showing signs of life for this upcoming football season. It’s also strange because Head Linemaker David Strauss’ Twitter profile is still silent, his usual bombastic bragging and outrageous challenges muted for over a year now.

However, their Lock of the SZN NFL gambling promotion is promising every single member a win to start September off with a bang and a bigger bankroll. Despite the MyBookie Contest page only showing last March’s NCAA Bracket Buster and their continuous squares offer, this guaranteed lock is both inspired and generous, football free bets always welcomed by players.

It’s basically charity since anyone getting down on the 2021 season opener between the Dallas Cowboys and Tampa Bay Buccaneers will immediately double their money as soon as either team scores. It’s surely hoped that people turn around and throw that on some live in game wagering, but it certainly isn’t mandatory.

Rules are straightforward dictating a maximum stake amount of $25 and strictly one win per customer, as is customary. Strangely, gains arrive without a rollover requirement, meaning they can be immediately withdrawn afterwards, if so desired.

Action kicks off on Thursday, September 9th, at 8:20pm ET so visit MB soon to register and fund accounts in time to rake up some gratis returns.