Bet on the 2018 Golden State Warriors 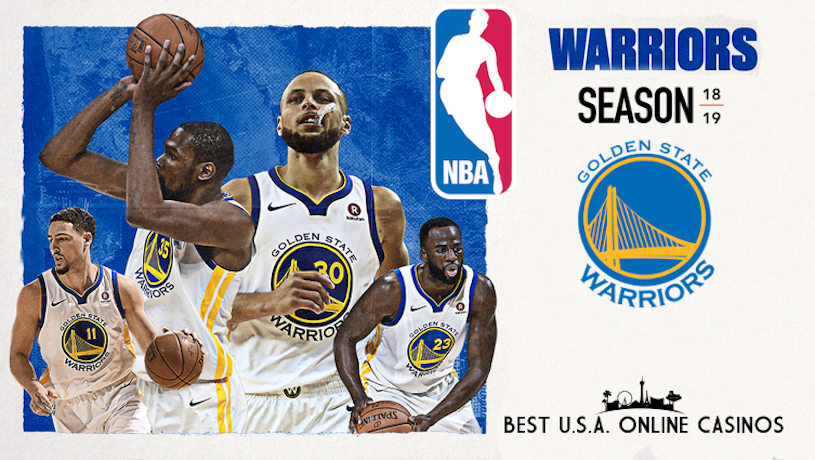 Sadly, experts weren’t shocking when picking the 2019 NBA Championship winners, Golden State obviously the overwhelming favorite. Loveable underdogs who went from “adored” to “hated” due to continued dominance and landing the league’s most-coveted free agent in Kevin Durant a few years ago. Observers suggested they were stacking up talent in a similar “unfair” fashion to Miami in 2010 and became villains overnight.

Now the Warriors have won 3 championships and made it to The Finals four straight times, many are praying for an upset in 2019 but it doesn’t look plausible. All current NBA odds reflect this reality and supporters of “The Dubs” are hard-pressed finding value.

Remember that anything can happen so it pays to spread action around on various outcomes. Not to mention, big sportsbook welcome bonuses are up for grabs for opening new accounts, providing extra reasons to be excited.

Where to Bet on Golden State Warriors

Everyone lists Golden State as huge favorites, but nevertheless that doesn’t make it wise to plunk down anywhere without doing research first, which is why this guide exists. Operators routinely offer slightly different numbers and in certain situations huge disparities are found, leading to advantages for specific lines.

First let’s examine worst Warriors odds, presently witnessed at BetDSI with -235, unsurprising to those reading our Los Angeles Lakers 2018/2019 gambling guide as they constantly post unfriendly lines. Another wonky option is Over/Under season wins at 63½, which might be high considering success habitually breeds laziness in sports because players aren’t as hungry, the bulk of other sites therefore settling on 62.

They’re followed closely by a destination equally scared to dangle something meaty, Intertops also setting traps for unsuspecting visitors with -189 for a July parade and -303 to take The West. These would be undeniably terrible to lock in.

Choices are a little better at MyBookie, who of course put “G. State” on top, extending -180. Next-closest team is Boston at +700, the popular pick to come out of the Eastern Conference (and then lose) this year.

MB are then bested by Bovada’s timid bookmakers dawning “Big Boy Pants” and offering -165, quite adventurous by their standards. They usually hate presenting possibilities that could result in getting burned, although they’ve drastically improved lately. That said, G.S. is -250 to roll through The West, which definitely reeks of Head Trader, Pat Morrow’s customary cowardice.

Naturally, the place to go is industry-leading BetOnline for a respectable -155, ensuring value to members. However, Morrow’s spineless position of Warriors -250 was mirrored, so hopefully they can differentiate themselves from the faint-hearted “professional” sooner rather than later.

Other options fuel speculation Laker fans are running the book since they seem to be trying to influence trade talks, Klay Thompson being +510 to sign with Los Angeles next year and Durant +635. Sure the “No” is strongly positioned, but merely suggesting this will be enough to irk the already-sensitive Bay Area faithful. It’s assumed they’re just trying to get press mentions through these questions, like what just happened here now.

In any event, the best place to bet NBA is MyBookie so go read up on details and important information about them. Spoiler alert: they’re excellent from top to bottom.