There have been lots of twists and turns leading into the 2019 NFL Season but none as shocking as the revelation only three places are offering special bonuses for cryptocurrency transactions. It’s even more puzzling considering every internet sportsbook accepting U.S. players lists at least a few coins, with Bitcoin being the most popular global financial tool these days.

Regular readers are probably getting tired of hearing this, but one more time, crypto is the only way to go. No matter which is used, they’re fast, safe, cheap, and totally anonymous so nobody knows anything. There’s clearly lots to love. 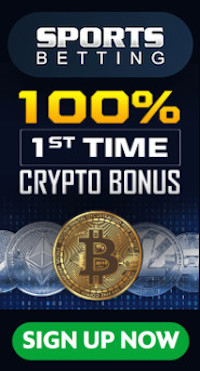 So the first two destinations are actually owned by the same company, in business for close to 20 years, servicing hundreds of thousands of members. Anyone who read our honest review of SportsBetting.ag already knows they have loads of contests, every product imaginable, and yes, accept many different alt coins.

They are currently offering a 100% match up to $1,000 for all initial transfers with Bitcoin, Bitcoin Cash, Ethereum, Dash, Litecoin, or Ripple during the first month of football season. The minimum amount to send is $20, with a slightly higher rollover requirement of 14x before balances can be requested in a payout. Also, this promotion is only available to Canadians and Americans, with every other region restricted.

Next is sister site, BetOnline, listing exact same amounts with identical terms and conditions. The reason for mentioning them is that it’s possible to sign up at both and get twice as much free money, while also creating a few options for where to play.

There’s no rule barring this, so sign up at WTO-compliant BetOnline gambling site if craving a double dip to fatten two bankrolls at once. The most important thing to remember about both is any unused funds expire after 30 days so ensure to risk them beforehand.

After the initial offer is claimed, both continue to extend 35% crypto casino reload deposit bonuses for each and every transfer afterwards. Terms are identical, including the 30 day time limit, however, balances merely arrive with a rollover of 6x so it’s easier to clear and withdraw.

The only other option is at Bovada, giving a 100% match, but sadly up to a maximum of $300. Therefore, if really wanting to stretch a dollar, the first two promos are the ones to claim for NFL action in 2019. Although, if dabbling in Las Vegas style games too, they’ll issue a separate match of 150% up to $900, but funds are only valid for slots and tables.